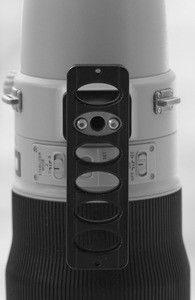 CRX-5 Low Foot/Plate
For Series II Canon Super-telephoto lenses: 400mm f/2.8L IS II, 500mm f/4L IS II, 600mm f/4L IS II and the new
200-400mm f/4L IS USM Extender 1.4.
Many folks have used our B&H affiliate link to purchase one of the new Canon Series II super-telephoto lenses. Thanks to them for that! And many folks on recent IPTs and on the In-the-Field Workshop have brought their new toys with them. As far as lens plates and lens feet, I have seen them all. With the original lens foot and a P-50 plate both the 500 II and the 600 II are back heavy no matter how far forward you push the plate. And the foot itself weighs the proverbial ton. And when using either of these with a Mongoose M3.6–you should be–the mounted lens is off-centered and, because of either torque or a breeze, will rarely stay still atop the tripod. And the CR-80 that I used with my beloved Canon EF 800mm f/5.6L IS USM lens simply did not work with either the 500 II or the 600 II.
One friend showed up with a new 600 II and had to use quarters as shims to get his plate on. He was constantly begging for the right Allen wrench to tighten up the jury-rigged monstrosity that he had created. Another had a new 500 II with a third party plate that left his rig terribly back heavy. All of the new lenses have more weight at the back of the lens than their predecessors. This makes hand holding a much easier endeavor but unless you have the right replacement plate or foot, balancing the lens on the tripod head from front to back can be either difficult of impossible, especially for those using pro bodies like the 1D X or the 1D IV. A third client showed up with a foot from one of the what I call “knock-off companies.” These firms either make sloppy copies of the quality stuff designed and created by 4th Generation Design or Wimberley or they simply make stuff on their own that does not work. This last photographer was not able to balance his rig properly. When I asked him about it he said that they had contacted the folks who made the foot and told them about the problem. They said that they knew about the problem and would be glad to sell him the adaptor that he needed after it was designed and manufactured.
John and Walter Zeiss at 4th GD took their time and came up with a masterpiece. They created the CRX-5. This adjustable lens foot was designed especially for the new Canon Series II lenses with functionality in mind. You get to choose where the foot lines up from one of 6 set positions. I have had one on my 600 II for a while now and I set it up using the second hole from the back. My 1D X balances perfectly with the body alone, with the 1.4X III TC, and with the 2X TC. I do not have to move the foot. (I do of course have to move the lens from front to back in the clamp each time I add or subtract a teleconverter). The design is elegant, clever, and deadly efficient. The lightweight CRX-5 is somewhat of a hybrid lens foot/lens plate as there is enough room between the plate and the lens so that you can carry the lens by the foot without pinching your fingers. Best of all, assembly was way-easy. I did it myself with barely a glance at the instruction sheet. The CRX-5 is also best for the 400 f/2.8L IS II and for the 800mm f/5.6L IS.