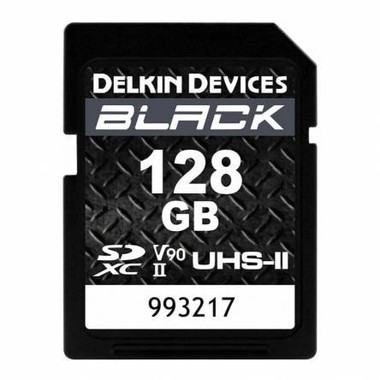 The BLACK SD UHS-II (U3/V90) Memory Card from Delkin Devices combines industrial strength & reliability with unparalleled performance, plus a quality guarantee like no other card. Offering speeds suitable for professional photographers and videographers, the BLACK SD UHS-II cards are specifically built to handle the high-performance demands of today and tomorrow’s cameras; from high-speed action shots to super slow-motion footage. BLACK is the toughest, most reliable memory line on the market and is sold only through authorized camera stores that are chosen for their commitment to customer service & knowledgeable staff.

Utilizing a proprietary injection molding process, Delkin BLACK SD cards are designed to be 3 times stronger than regular SD cards and able to withstand over 45 pounds of impact. This specialized casing utilizes an innovative material, making each card virtually unbreakable and superior in terms of reliability and ruggedness. In addition to being significantly stronger and far less breakable than standard SD cards in bend/pressure tests, BLACK cards are dust, water and shock-proof, as well as have an extended temperature range that allows the card to perform flawlessly in environments ranging from -25°C to 85°C.

Capable of offloading data at speeds reaching up to 300MB/s, the Delkin BLACK UHS-II (V90) SD card ensures the quickest, most efficient data transfer from card to computer for immediate access to your files and sooner post-production start time. This is ideal for photographers and videographers who need to quickly unload large amounts of data and get back to shooting.

Not offered anywhere else in the world, Delkin BLACK memory cards and those with the “48HR logo” come with a premium 48-hour replacement guarantee in addition to our “Lifetime Warranty” policy. We will happily replace any non-working card within 48 hours or less (not including weekends), prior to receiving your non-working card.