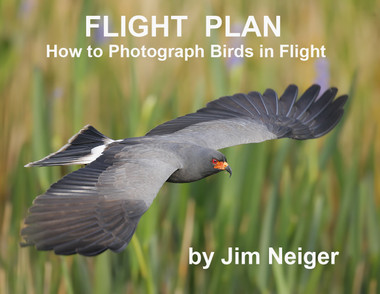 Flight Plan, by Jim Neiger
97 pages, 127 images: $50 A PDF file sent by email
Fact: 99.9% of all photographers (including me) will find it easier to photograph birds in flight and in action while hand holding than when working with a tripod-mounted lens. (James Shadle and Todd Gustafson make up a large part of the other 0.1%)
Here is the foreword that I wrote for Jim:
I have known Jim Neiger for a bit more than a decade.  Even back then he was passionate about bird photography though he had purchased his first dSLR—a Canon EOS-10D--less than a month before.  As many folks have done, he began with the venerable but oft-maligned Canon 100-400 zoom lens, hand holding of course.
As Jim tells the story, I called him at home at midnight in June, 2003, to secure a ride on his bass boat the next morning.  I loaned him a 600.  He saved mine from a swim in the lake when another boat sped by too fast.  Jim and I had a good deal for about 18 months—he took me out on his boat for Snail Kites, Sandhill Cranes, Barred Owls, and a variety of nesting herons and egrets.  I loaned him an extra 500mm f/4L IS lens.  Within two years, he purchased his own.
Though he owned a flimsy tripod, Jim began hand holding his own 500 right off the bat. By 2006 he was running Flight School workshops teaching folks the techniques that he had used and developed for hand holding super-telephoto lenses for bird photography.  Today, there is a legion of skilled photographers using Jim’s hand holding techniques to capture dramatic images of birds in flight and in action.  Several of today’s top notch bird photographers including David Hemmings,  Arash Hazeghi, Michael Zajac, Kevin Karlson, and Doug Brown either learned directly from Jim or were greatly influenced by his teachings.  And many dozens of his students are producing high quality, contest winning images on a consistent basis.
Before Jim popularized the hand holding of big lenses most serious bird photographers stated that doing so was simply not possible. Little did they know….  Most remarkably, yours truly has been seen hand holding his 600mm f/4L L IS II lens a bit lately.   Thanks Jim!
In “Flight Plan; How to Photograph Birds in Flight” Jim shares everything he knows about hand holding big glass in clear, simple, easy-to-understand terms. If you study and practice, you will soon become a member of Jim’s tribe.  Have fun and enjoy the rewards.
After editing Jim's great new e-Guide I gotta say that my flight photography improved a good deal as I gained a better understanding of--among others--his "bump the focus" techniques. Though Flight Plan pitches Jim's hand holding philosophy and techniques many of the great tips will help folks like me who do most of their flight photography off a tripod.